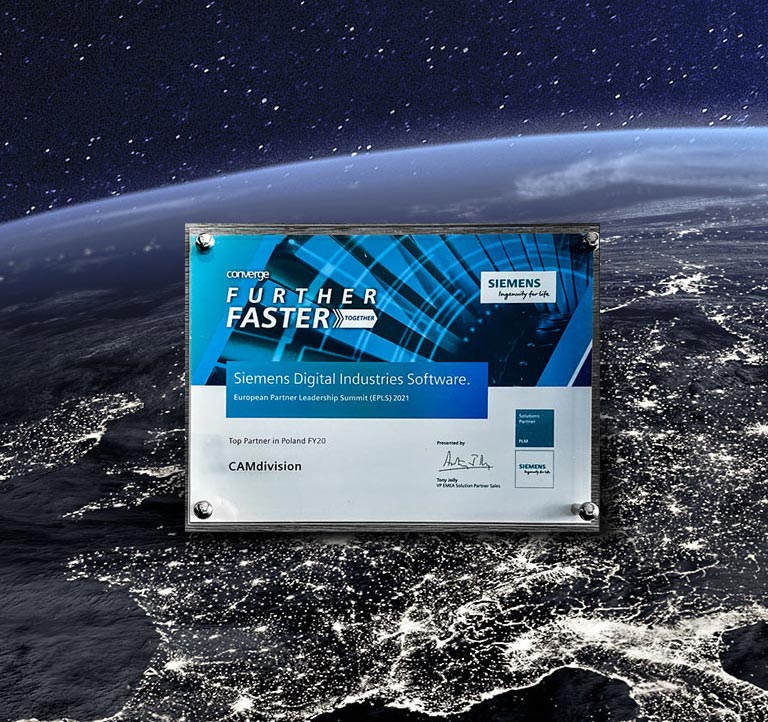 CAMdivision is the largest PLATINUM SIEMENS Partner FY2022 in Poland!

In 2019 we received the European award: TOP European Partner for Manufacturing Engineering Software! In the last 15 years we are the only company from Poland to have won 6 such European awards from SIEMENS Digital Industries Software.

Since 2007 we have been offering CAx/PLM solutions based on SIEMENS NX system. We have the greatest experience in Poland in the implementation of NX CAD/CAM packages, specialist applications for the construction of injection moulds NX Mold Design and die-cuts NX Progressive Die Design, and the creation of post-processors.

Our activity is not limited to software only. We are proud of the achievements of Agnieszka and Sylwester Sypien of the Wroclaw Karate Kyokushin Club we support – a wonderful sports family of multiple World and European Champions!

On the basis of the Polish version of the NX 4.0-8.0 interface that we are developing, further updates and documentation are being created at the headquarters. We publish manuals for NX CAD/CAM and Solid Edge for our customers, including free eBooks.

The annual meeting of the business partners of SIEMENS Digital Industries Software summing up the previous year, which was quite a peculiar one, let’s be clear about this, also was conducted in a peculiar way, i.e., online, in the last week of January 2021.
In difficult market conditions, CAMdivision maintained its PLATINUM status, as the only company in Poland and in the area of Central and Eastern Europe, the criterion of which is the turnover with SIEMENS Digital Industries Software.

About 2/3 of implementations of NX CAD/CAM and TEAMCENTER software, in which the company specialises as SIEMENS SMART Expert in this field, belongs to CAMdivision on the Polish market.
On the three-day meeting the year 2020 was summarised commercially and the most interesting implementations and the directions of software development for the coming period discussed. In general, the importance of everything "cloud" & "electro" is growing, and in the latter case it is not about music…

However, there was a musical accent, because every day during the meeting songs from the concert "Waiting for THE CURE" by Mariage Blanc group, which took place last year in Gdansk, were broadcasted. It is worth mentioning that the keyboards and drums in this band are played by people you know from a completely different angle in CAMdivision. The concert itself was made available for charity purposes and SIEMENS for its part supported a health foundation. A full transcript of the concert can be seen below: